The Flint Firebirds of the Ontario Hockey League (OHL) are giving out 1,000 of these real nice Bob Perani goaltender bobbleheads at tonight’s game!  Here is a little bit of background info on Bob… 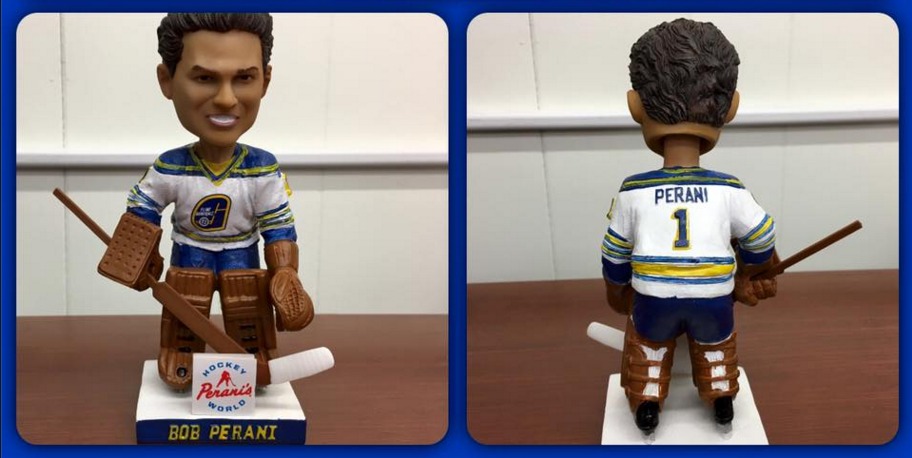 Bob Perani was a professional ice hockey goaltender for the Flint Generals in the International Hockey League. He was also the founder of Perani’s Hockey World sports retail chain in 1976, and owned the naming rights for the Perani Arena and Event Center. Perani died on April 15, 2012 while traveling on an international flight from Detroit to Tokyo.

Perani was born in Italy in 1942 and moved to Canada with his family in 1953, settling near Toronto.  He attended St. Lawrence University and played a number of leagues in Michigan and Ontario. He and his wife Kris moved to Flint in the late 1960s and never left. Kris died from cancer in 2006.The following year, as part of the ‘Perani Group’, he bought the Flint Generals. He retired as a player after the 1974 season and went into the pizza business and in 1976 started “Bob Perani’s Sports Shop”.

Perani retired to Thailand and died on a flight from Detroit to Tokyo en route to Thailand. (Wikipedia 2016)

Here are some early promotional item lists we have recently added for the MLB!

Here are some early promotional item lists we have recently added for the MiLB!

Stay tuned each week as we add more and more MLB and MiLB lists to the site!

* If you know of any items that we may have missed please comment below.