167, 177, 225…those are the amount of hits that Jose Altuve has racked up in each of the past three seasons respectively.  The 225 hits he put up in 2014 were the most hits by a second baseman since 1936!  Altuve is only 24, so we hope to see eye-popping offensive numbers like these for a long time. 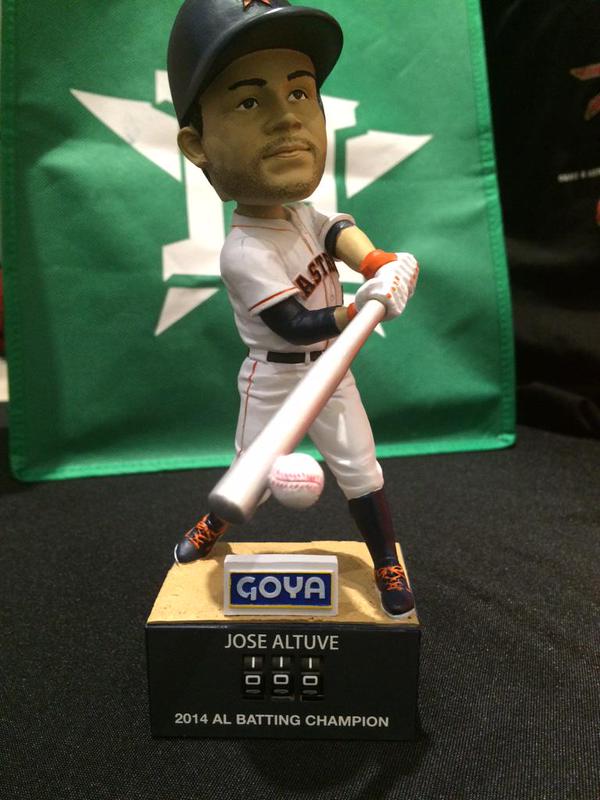 The Astros have languished for a while now as a franchise, but they have grown a serious core of young talent that has them poised to become contenders in no time.  Don’t believe me?  Just ask Sports Illustrated what they think.  Not since Ichiro Suzuki, has a player merited a hit-counter bobblehead more than Jose Altuve.  Check out the rest of the Astro’s SGA lineup for 2015 as well.  There are some gems in the bunch, but the Altuve hit-counter bobblehead is the clear #1 choice for us. (It has a silver bat to commemorate his 2014 Silver Slugger award as well!)

If one franchise in baseball is known for the rally monkey more than most, it’s the Angels.  The little dude is the teams unofficial mascot AND even has his own Twitter feed!  It only makes sense that amidst their SGA items in 2015 you will find not one, but two rally monkeys.  Neither of these guys came in as our top pick, but they are worth noting.  Especially since one is one is a Star Wars Jedi Rally Monkey and the other is a Military Rally Monkey.  Our choice for best Angels SGA in 2015 is their backpack cooler.

There is no better ultimate tailgate accessory than this one.  Portability is key when you want to not only tailgate, but socialize and travel around the parking lot by foot.  You can’t pack up and move a BBQ grill around.  But you certainly can stuff a twelve-pack on your back like some booze-laden camel and make some new friends along your journey.  This item is a must have for any professional tailgaters out there.

From the moment we saw this Athletics item we feel in love with it.  It is difficult for a t-shirt to crack the top picks list for any team. 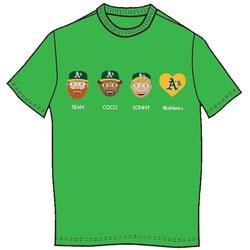 With all the bobbleheads, hoodies/jackets, and other high end items; how does any lowly t-shirt stand much of a chance?  Well, never say never, because it’s been done.  The Athletics emoji (8-bit) t-shirt is our selection for the number one A’s giveaway for the season.  There will be people who refuse to agree with us on this one, but we don’t care.  The Athletics colors, coupled with some retro 8-bit-ish emojis was a recipe for success.  The Athletics are known for being that under-the-radar threat, that might lack flash, but is hip and capable nonetheless. We dare you not to see this t-shirt and wish you had one (even if you aren’t an A’s fan).

It rains a lot up in Seattle.  So headwear is not just an accessory, it’s a necessity.  For that reason we have a tie between two amazing hats as our top pick(s) for the Mariners.  First up is the reprisal of a sick giveaway in seasons past; the beard hat.  The second incarnation (or third maybe?) of this SGA has an emerald blue beard.  We warned Orioles fans not to wear their tacky O’s clothing SGAs around Baltimore.  But for some reason, we feel like it is more than safe in the hipster haven that is Seattle to wear these pieces.  The second item to claim a tie for top pick is the Hisashi Iwakuma bear hat.  These dangler (I think that’s what the hell these things are called) hats have been pretty popular in general for young people in recent years.  I know the Phillies gave out a Phanatic one a little while back that was pretty cool looking.  So we couldn’t pick which was better here.  Bear hat, beard hat…bear hat, beard hat.  Hence the tie at the end of the day. 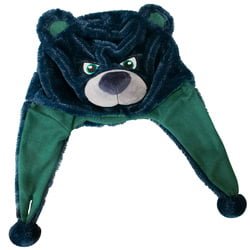 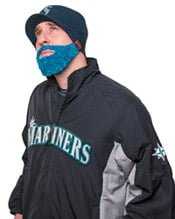 We are going with another theme based top pick(s) for the Rangers.  Garden gnomes is the theme and you have three to enjoy this season.  First up is Derek Holland, dressed in full Dumb and Dumber attire no less. 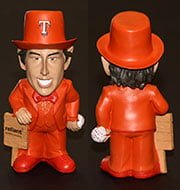 Followed thereafter by Elvis Andrus with a stolen base in hand.

Lastly, poor Yu Darvish (tough luck this year).  We particularly like these Rangers gnomes this year because of one simple design accent: little wooden signs.  Each one (only 2 of the 3 have been pictured yet) has a little wooden looking garden sign for the SGA sponsor.  It’s the little things that turn an ordinary piece into a more well thought out one.